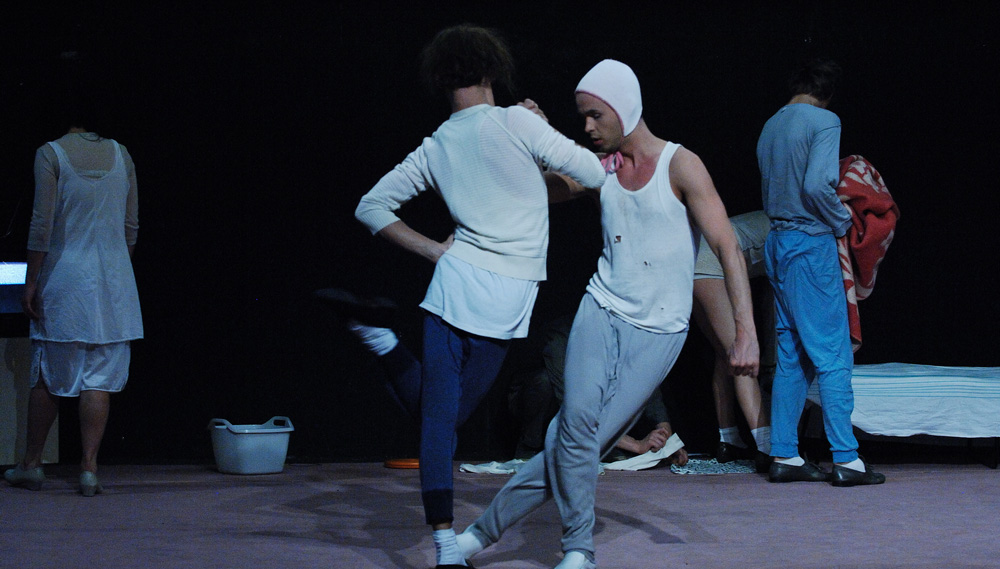 8 square meters is the symbolic space of “madmen”, where everyone lives in his imaginary world, speaks the language only he understands, hears the sounds familiar only to his ears only.

Six people of different fate are living in their own micro worlds. They are locked in the 8 square meters cell, with cold metal floor. They all share a single desire and passion – to dance. The only way to survive in this mad world is to dance tango.

The Argentinean dance in the performance is portrayed unconventionally. Here one can spot Napoleon or a squirrel running in the background saving its huge nut – everything seems distorted as in an old film.

“8 m2” in some way has become a manifest of Gytis Ivanauskas theatre.

“<…> this premier of “Gytis Ivanauskas Theatre” did not fade out of my memory even after the grand celebrations of Christmas and New Year’s Eve, as well as forced it to attribute to the real theatre events not just common theatre routine. <…> Intentionally or not „8 m²“ became a blazing example of contemporary theatre especially when this concept is not a matter of speculation trying to reflect diverse sense of society but on the contrary it is attempted to exist in natural environment, reflecting not psychological motivations of characters but their movement trajectories. Precisely in such a theatre motion becomes the primal mean of expression. Especially in such a theatre motion has to be performed precisely and professionally. <…> there are lots of hints in this performance: sex “industry”, TV staring as well as bloodless dance for the sake of it. Here people run, lie, wash legs, watch something, bring the tree of aloe vera and decorate it with Christmas toys and dance dance… Dance becomes the fashion of life. <…> In association this performance in many ways reminds the mood of films by Emir Kusturica.”

„<…> in this performance we see the group of young people dancing and so „killing time“ in the closed space. Nobody is trying to get out of this space. Abstract time, abstract space (only the TV monitor transmitting some concerts and some „mickey mouse“ travelling Alon the stage). <…> Every character has its back drama.„