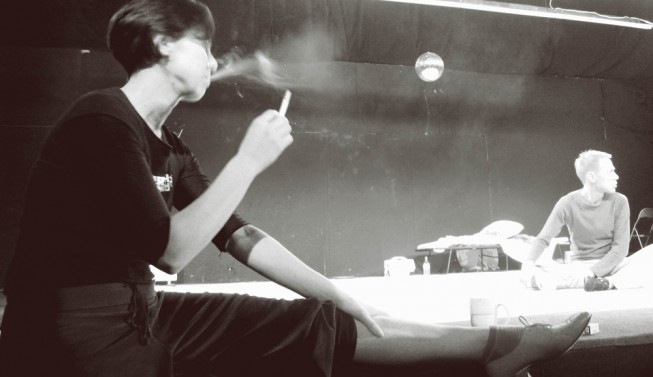 In 2004 Gytis Ivanauskas has completed his master studies in Lithuanian Music Academy and obtained a qualification of actor dancer. Gytis Ivanauskas entered the professional stage in year 2000, where he played the teenager Kurt in M. von Mayenburg play “Fireface” which was directed by Oskaras Koršunovas. Biggest roles that made him famous are Romeo in “Romeo and Juliet” by W. Shakespeare (director Oskaras Koršunovas) and Raskolnikov in “Crime and punishment” by F.Dostojevskij (director Gintaras Varnas). G. Ivanauskas also takes part in various dance projects, created scenography for his one-man show „Lighthouse“ (director G. Varnas).

In 2005 he established „Gytis Ivanauskas theatre“ where directed a dance show „Hallmark“ and „Men in White Skirts“. In 2005 he got the Lithuanian theatre union “Fortune” prize for Raskolnikov in “The crime and the punishment” and was nominated for the Lithuanian ministry of culture prize “The golden stage cross” for Raskolnikov in “Crime and punishment” and Boy in “Lighthouse”.

Gytis Ivanauskas Teatre was established in 2005. This is probably the bravest move of Gytis Ivanauskas in his creative biography. The birth of the theater was determined by the desire of young and ambitious actor to show the completely different theater and dance, to obtain the independent creative potential and to engage himself into the promotion of his creativity. The new coming was inspired by the young artists who were willing to break the rules of contemporary dance.

The Credo of Gytis Ivanauskas is a completely new attitude towards artists and professional performing arts where the synthesis of totally different creative forms is possible. The performers of the teatre are professional dancers, actors playing in various drama performances and cinema, even singers, enriching the performances with their unique share. Theatre‘s repertoire is always updated with new and original creative forms and ideas. With the debut performance „Hallmark“ Gytis Ivanauskas Theater was recognized as the „Best new theater“.